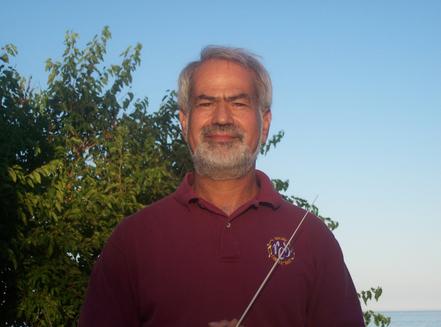 Since 2002, Mark Eichner  has served as Music Director and Conductor of the Racine Concert Band, only the tenth band to be awarded The Sousa Foundation “Sudler Silver Scroll ” for outstanding artistic achievement by  a community band. As a trumpeter, he has performed in the Milwaukee Symphony Orchestra, the Wisconsin Philharmonic, the Florentine Opera, Present Music, the Brass Band of Battle Creek, the Chicagoland Pops Orchestra, the Woodstock Mozart Festival, and the Skylight Opera Theater. As a member of the quintet “BrassWorks”, he performed a nationally broadcast recital at the Dame Myra Hess Concerts in Chicago, and assisted the Canadian Brass in Wisconsin performances.

"An American Original" was the title of the Lecture-Demonstration he presented to a convention of the College Band Directors National Association at Ball State University, exploring the six band compositions by Robert Ward, a Pulitzer Prize winning composer and former Army Bandmaster. In recent years, he has contributed several arrangements and compositions premiered by the Racine Concert Band and Racine area school bands.


In 2014, he retired from teaching after 41 years as a music educator. From 1982-2014, he was the band conductor and trumpet instructor at UW-Parkside, where he founded the UW-Parkside Community Band, the WSMA State Solo & Ensemble Contest, and the Summer Arts & Crafts Festival. He was department Chair from 1998-2007, and received a UW Regents’ Award for Teaching Excellence in 1993.

Prior to his appointment at UW-Parkside, he taught at the University of Science and Arts of Oklahoma and in the Austin, Texas public schools. He earned the Bachelor and Master of Music degrees at the University of Texas. His principal teachers were Tom Lee and Robert Reynolds in conducting, Richard Metzger and Frank Elsass in trumpet, and Cathy Kaiser in Alexander Technique.